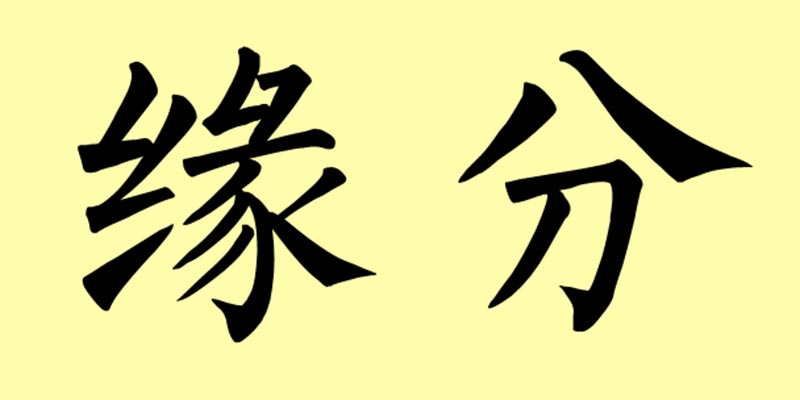 Yuanfen (缘分) is a Chinese word you might encounter in everyday conversations. However, the real meaning of Yuanfen is not that easy to be explained or translated directly.

The word Yuanfen has been translated into many different English words, including fate, predestination, luck and serendipity etc. But none of these words matches exactly the real meaning of Yuanfen.

By using the word Yuanfen, one often indicates that a person’s affinity or relationship with other people or with certain objects/events are predestined. Yuanfen is the fate, chance or binding force that brings this person and other people or objects together. The word Yuanfen can be used for personal relationships, including love and friendship, and can be used for business as well.

Here’re some typical situations for using the word Yuanfen.

For example, a man and a woman fell in love with each after but then lost contact. However, one day they ran into each other again at an airport in a foreign country so they were able to fall in love again. Since meeting each other again this way is quite a coincidence, one can say that there is Yuanfen between this man and this woman.

Yuanfen can be used at non-romantic situations as well. For example, Mr. Li and Mr. Wang each works for a different company, but they have run into each other three times in a month at three different conferences. When they meet the third time, they both say that it was Yuanfen that has brought them together again.

Yuanfen can be used between a person and an object or event as well, and it can refer to negative encounters (often ironically) too. For example, Tom said he had a Yuanfen for Japan earthquake because over the last three years he had encountered earthquake twice during business trips to Japan.

The word Yuanfen is believed to be originated from Buddhism and sometimes is shorten as Yuan (缘).

There are many Chinese idioms using this word. For example: “有缘千里来相会，无缘对面不相识”, which says: If there is Yuanfen between them, two people can eventually meet even if they are a thousand miles away. On the contrary, if there is no Yuanfen, two people can miss each other even when they are face to face.

If you have watched enough Chinese movies or TV dramas, you might recall that when a couple is about to break up or get a divorce, one often says that “你我缘分已尽”, which means that the Yuanfen between us has run out and we are no longer meant to be with each other.